While the range of topics explored by the presenters at the GW Disrupting Digital Humanities Symposium (#GWDH15) was vast, Eileen Joy’s call for compassion in the humanities really underscored what emerged as the – rather unexpected – unifying force behind all of the papers: a commitment to care. If thinking DH is thinking networks and digital archives, thinking projects of passion, what sustains these assemblages, then, is the compassion of their myriad communities. For Joy – and I imagine many of the other participants would agree – scholars of the humanities should invest themselves not in preserving the legitimacy and authority of an institution from which knowledge (hypothetically) trickles down like capital in Reaganomics, but in creating new venues of care and curatorship for unbound, nomadic knowledge, for thought projects unrestrained by the regulations of the University. The Humanities, imagined as a multiplicity of compassionate networks, should function not as a filter for public knowledge, but as a space for curating the experimental and playful knowledge that emerges when the potentialities of every possible platform for scholarly productions are harnessed. And these platforms are built not by individuals (though individual labor should be recognized) but communities, collectives that include the para-alt-non-academics whose work deserves to be preserved.


However, as Angie Bennett Segler’s and Dorothy Kim’s projects similarly illustrate, many of these communities remain invisible – especially when the many digital archives that enable our scholastic projects are created by women and persons of color. Kim brought to our attention the labor of the “Turkers,” the underpaid women and non-white employees of major corporations like Google and Amazon who actually do the work of digitization, but who are made to remain invisible by corporate policies that force these employees to work at night and in remote buildings. The disruptive potential of projects like Bennett Segler’s Digital Piers and Kim’s archive of early Middle English texts is the visibility of the female labor responsible for the work. If the authority of the archive, which Bennett Segler reminds us is born from the power of the institutions in which our legible things are collected (colligere) to regulate access, digital projects disrupt these isolated and male-controlled loci of power by distributing information via new technologies AND making apparent the bodies that are building these new infrastructures.


Sadly, Suey Park’s personal narrative illustrates the dangers that inhere in performing this kind of cultural work in the digital realm. An activist for women of color, particularly Asian American women, Suey Park has been not only harried and trolled on Twitter, but she has received rape and death threats, been doxed (which I only just learned means having her personal information hacked and distributed), and even been targeted unjustly by an investigation which caused her to leave her state of residence until she could safely return home. If the internet provides a space for previously unheard voices and opinions, it also engenders new forms of harassment and violence. Her story stresses the urgency with which we need to create networks of compassion so that activists like Suey Park can use these democratic spheres to advocate for women of color. Our complacency creates the risk that these voices will be silenced and that internet communities will be gentrified in much the same way physical urban spaces are so frequently appropriated by the white upper middle class. 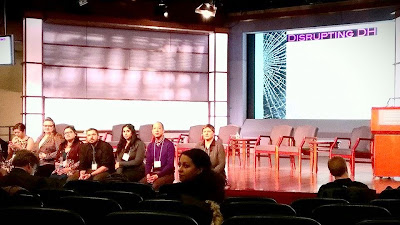 Although I had to miss the presentations by Jesse Stommel and Roopika Risam, it was a pleasure to see Stommel lead the collective of speakers out of their chairs during the roundtable discussion and onto the edge of the stage, thereby breaking the fourth wall that marked their bodies as authoritative and their space as exclusive. This act evidenced a real commitment to the democratization of information that each of the speakers desires, as well as the group’s willingness to relinquish the power granted them by the Academy – at least temporarily. Sure, the act was rather symbolic, but it was a risk nonetheless, and one which underscores the precariousness of our field and the digital humanities as a sub-discipline. And taking risks is an essential part of developing the compassion that will not only sustain the Humanities, but help our field thrive as a collective of heterogeneous interpretive networks instead of a homogeneous and authoritative discipline. Compassion as disruption.
Posted by Unknown at 12:10 PM